The Story Behind Confederate Treasury Bonds 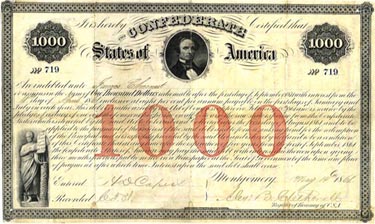 The central Confederate Government issued bonds to raise revenue for the War effort as well as the general funding of the day-by-day activity of government much like our government does today. State governments as well as local governments along with businesses such as railroads, mining companies, insurance companies and others also issued bonds to create revenue. Most bonds had interest baring coupons attached that could be redeemed at designated times (usually every six months). After the last coupon was redeemed (many years later) your initial principle investment would be returned.

Unfortunately for the investors of these Confederate Treasury bonds, their monies were lost at the close of the War. The U. S. government refused to take on the debt of the Confederate government feeling no responsibility to aid those civilians who had supported the Confederacy. Had there been a truce or surrender, perhaps. But in the case of the Confederate Government, there was neither.  Its President was captured in flight and as I understand it, was tackled to the ground—-an act of determination and no surrender.  Those brave men who served the Confederacy and its military should always be remembered and honored as Southern Americans who fought for states rights and limited government.

The first eight types of bonds were issued from the first seat of the capitol in Montgomery Alabama. The rest were issued in Richmond Virginia after the seat of government relocated. There were different printers and various dates throughout the War.